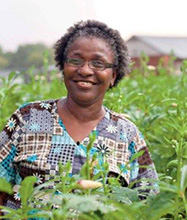 The 17th Crystal Ball will provide the backdrop to honor four outstanding Community Stars of Northwest Mississippi.  The Crystal Ball helps over 420 nonprofit organizations and causes through the Community Foundation of Northwest Mississippi, with an emphasis on education and health for children and youth. Tickets for the January 21 gala are $150 per person and are available for purchase at 662.449.5002 or www.CFNM.org until January 13 unless they sell out earlier. These regional Community Stars will be honored along with the gala’s Star of Hope, Richard Grant author of “Dispatches From Pluto: Lost and Found in the Mississippi Delta”.

Dorothy Grady-Scarbrough of Shelby is the 2016 Margaret Maddox Woman of the Year. Dorothy is a planter of seeds and it all started in her backyard.  She founded Mississippians Engaged in Greener Agriculture (MEGA) as a direct result of the many financial and health disparities that have long plagued the Delta.  MEGA initially began to improve the resource and education of local small farmers, and has since developed efforts in youth leadership, youth mentorship, community engagement, health education, food security, and locally grown vegetable purchase and consumption.  A registered nurse, Dorothy was honored as the 2016 Rural Health Champion by the Myrtle Evers-Williams Institute for the Elimination of Health Disparities at the University of Mississippi Medical Center.  Working to eliminate food insecurity, Dorothy has a commitment to rural health, food insecurity, community organizing and community outreach.  She is a mother of five and works to improve the health of the 2,000 community residents of Shelby.

The Margaret Maddox Woman of the Year is named for an accomplished businesswoman and dedicated community volunteer.  She served in leadership roles in numerous charities.  She received the prestigious ‘Order of the Red Triangle’ from the YMCA due to her leadership and service.  Margaret Maddox served in various leadership capacities for a host of charitable and civic organizations. In addition to her work with the YMCA, she led a $20 million campaign for Belmont University, and served on the boards of Leadership Nashville and Sarah Cannon Cancer Foundation.