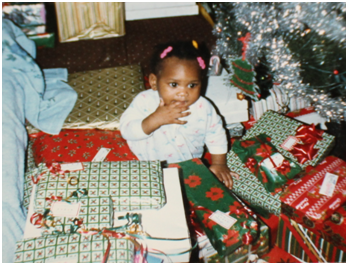 Mae Ruth and her family became recipients of The Box Project when she was just eleven years old. She grew up in Tallahatchie County, Mississippi and was raised on two different former plantations where her dad worked the fields.

Growing up, her family consisted of her mom, dad, two brothers and two sisters. Their starter home was a three-room shotgun house that had no indoor plumbing. Her parents slept in the front room where the heater was located, while she and her siblings shared the other bedroom; the girls shared one bed, and the boys shared the other. The last room in their house was the kitchen. Though they didn’t have much, they were happy. They eventually moved to another home and lived in a trailer. The trailer was an improvement from their shotgun house but after many years, it became run-down and her dad didn’t make enough money to get everything that the family needed.

After some hard years, they were introduced to The Box Project by a social worker. Because Mae Ruth was the only one in the family that could write, she filled out the application. The Box Project matched them with their very first sponsor. Her biggest memories about the family’s sponsors were during the holidays. She remembers several Christmases where the UPS truck backed up to their trailer with a trailer full of boxes and would often come back the next day with another load of boxes. The family would get so many boxes full of gifts that their modest trailer was full of the boxes and would take the children all day to open the gifts. Their sponsor’s gifts included cloths, toys, books based on places the family wanted to travel, school supplies, and household items.

As recipient of The Box Project, the family had several sponsors and was very grateful for each one. Mae Ruth grew up and gave back to her community by serving with AmeriCorps, putting herself through college to become a teacher, and now working for an early learning alliance in her home county to encourage, enrich, and support elementary achievement. She credits The Box Project as one of the reasons she is the person she is today.

She tells people that if they have the chance to become part of The Box Project, they should do it because it is a great opportunity that should not be taken for granted.

There are several ways you can become part of The Box Project.  If you are not in a position to make a long-term commitment we would like for you to consider becoming a Winter Holiday Sponsor.  This short-term sponsorship will make the holidays less challenging for a family who is waiting for a long-term sponsor.  Don’t have time to shop  ̶  send a donation to The Box Project designated for a Holiday Family and someone will do the shopping for you! Please consider making the upcoming Holidays special for someone living in rural poverty.  To learn more about how you can become part of The Box Project, please visit boxproject.org or call the office at 800-268-9928, Monday-Friday, 2 pm to 5 pm.