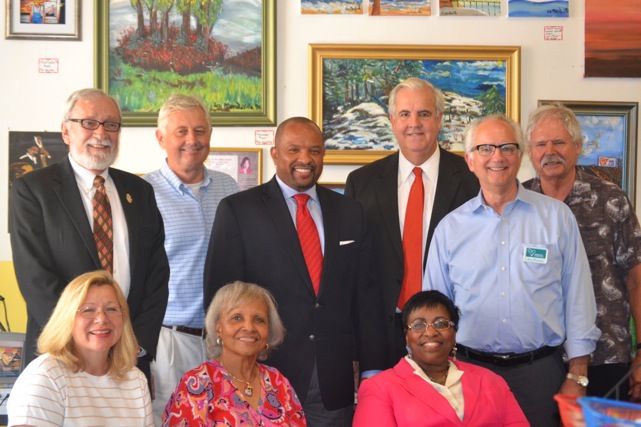 Clarksdale’s Rock & Blues Museum attracts local and visitors, presenting culture not only from Mississippi blues, but the rock and roll music it inspired. This young nonprofit offers the viewpoint of its Dutch founders, who transferred their collection from Holland to the Delta. The Community Foundation’s $5,000 grant triggered a $50,000 grant from Southern Bancorp Community Partners to enhance the museum’s operation.

A crowd gathered in the Rock & Blues Museum Tuesday for the presentation of a $5,000 grant for the museum.
The grant from the Community Foundation of Northwest Mississippi was presented to Theo Dasbach and Cindy Hudock, who operate the Rock & Blues Museum.
“It’s a unique place. We don’t know of any other museums quite like this,” Tom Pittman, President of Community Foundation of Northwest Mississippi said. “That’s why we chose them. They have economic development value, but they also educational value. It helps us understand who we are and people all over the world understand who we are.”
In 2013, the Rock and Blues Museum was awarded an $80,000 grant from the Delta Bridge Project to pay its employees during the next three years. That year the museum received the first $30,000 from the Delta Bridge Project grant, but to receive the rest of the funds, the nonprofit organization had to raise $10,000 on its own.
The museum spent months fundraising from companies and individuals in Mississippi and across the globe. After raising just shy of the money needed, the Community Foundation of Northwest Mississippi awarded them the $5,000 grant, giving them more than the required amount to receive the rest of the award.
At Tuesday’s meeting, Hudock and Dasback received the check and congratulated all who were involved. The grant will support the museum on its quest to stay open seven days a week by providing salaries for its employees.
Dasbach and Hudock hope to draw in new tourists by being open as much as possible.
“We hope to be open as much as we can,” Hudock said. “The goal is seven days a week because we realize that there is very little to do here, especially on Sundays. If we can be open on Sunday, that provides visitors with some Clarksdale experience. In order for us to be open seven days a week, we need to have employees. So the money goes specifically to the employees that will keep us open.”
The museum hopes to not only provide a spot for Sunday tourism, but to refer any attendees to other spots around town that are also open, thereby revitalizing community business.
“We can also direct tourism information and tell people what there is to do here,” Dasbach said.
Dasbach and Hudock opened the Rock and Blues Museum in 2005 as a nonprofit organization based upon their shared love of the blues and of the culture surrounding it. Since then, they have been providing the city with a tourist destination, attracting local and international visitors. The museum presents culture not only from Mississippi blues, but the rock and roll music it inspired.
“The name of this museum is Rock and Blues, but it should be heart and soul. That’s what this place is,” Mayor and board member of the Tallahatchie Foundation, Bill Luckett, said at the presentation. He said the grant is well deserved.
Both Dasback and Hudock were grateful for the support shown by Clarksdale.
“It was heartwarming to see that when we started to raise money we got so much from the businesses in Clarksdale,” Dasbach said.
During the ceremony, representatives from the Delta Bridge Project team addressed community partnership in general.
“We’re taking the opportunity today to say that when nonprofits work together, things get done,” said Lois Erwin, senior community development officer for Southern Bancorp Community Partners.
Pittman also believed a key to a stronger society is the cooperation and collaboration of various organizations for the common good.

“A community is not one thing,” Pittman said. “It’s the different aspects: education, health, tourism, economy and art. A lot of things go into making good quality of life. So I think that the more that all the nonprofits can talk to each other and see themselves not only doing their jobs but really building a community, then everyone benefits. There are so many assets that, if people work together, you can multiply.”

By Clara Turnage, The Press Register